How to Stop Destructive Behavior in Dogs

Disclosure: Some links in this post are affiliate links, so, at no cost to you, I may earn a commission if you click through one and make a purchase. This in no way influences my opinions or recommendations.

Do you go to bed and come down in the morning to chaos? Do you leave the house only to come back to a doggy-induced nightmare? Cushions ripped to pieces? Favorite shoes decimated? Cupboards chewed? Sofa with gaping holes? Chewed table and chair legs? Stripped wallpaper? It’s a common problem for those with dogs – from pups to old-timers. But don’t despair – whether you have a brand new puppy who is teething and testing his jaws, or an old girl who has been chewing up your house for years, there is a fairly simple solution.

Understanding Why Your Dog Chews Up Your House

Now, some may say “it’s what you expect when you have a dog” or “he does it to make me mad”. Both of those statements are way off the mark. Your dog doesn’t want to make you angry. Nor is the problem what you should expect and tolerate when you have a dog. Your dog shouldn’t be eating your house or your property. It’s a waking nightmare for you and really dangerous for your pooch. Like with any problem, the first and most crucial step in finding a successful solution is to understand the issue.

Whether it’s learned behavior or new, there’s a few simple reasons why your dog chews stuff up when you’re not there. The most common are anxiety and boredom. Teething can also be an issue with puppies. When a dog doesn’t have enough stimulation and is left of his or her own, they get bored and start entertaining themselves – by chewing up your house. When feeling anxious, dogs often exhibit destructive behavior, like chewing and ripping up the house when they are alone.

Once a dog starts causing destruction in the home, they’ll keep it up unless you correct them properly. It becomes learned behavior or the norm. So, you have to teach them appropriate behavior. Which is actually very simple – but it does take time – and many people get it wrong! Taking the right approach is crucial!

Can’t I Just Stick Him in a Cage When I Go Out?

Putting your dog in a crate is all well and good – but it’s definitely not the answer. Many extoll the benefits of using a crate – for example – with proper use, a crate provides your dog with “personal space” – a quiet, enclosed space that’s all their own – a bit like a den. However, crates are not to be used to simply confine your dogs. If you do choose to use a crate – never ever use it as a punishment. If you do – every time thereafter that you put him in his crate – even if you’re just putting him to bed – he’ll think he’s being punished – which will lead to a miserable, anxious dog and further behavior issues. Putting your dog in a crate confines him but doesn’t really solve the problem. It doesn’t teach him anything except that when you go out, you will shut him in a small space for no apparent reason – this doesn’t really encourage a healthy dog-human bond – and it certainly doesn’t teach him appropriate alone-time behavior. What happens if your crate door breaks? What happens if you have to take your dog somewhere (like on holiday) and have to leave him for a few hours without a crate? Normal service resumes and your dog will destroy his surroundings.

What if I TELL Him He’s Been Bad?

Well, this is the option that many, many people choose. It doesn’t work. It’s that simple. All it does is breed fear. If you’re reading this article, chances are, you love your dog and you are, or want to be, a great human companion to your four-legged friend. Shouting at, hitting, screaming at, or other negative reinforcement methods are not the right course of action for someone who wants a happy, healthy, well-mannered pet and wants to have a close bond with them.

Screaming at your dog, hitting him, using shock collars, or otherwise physically or mentally abusing them makes your dog fear you. If you love your dog, why would you want this? You want your dog to respect you. Your dog wants to please you. So, you need to train yourself to teach your dog what you expect from her. Walking in the door, seeing the destruction, and shouting at or smacking your dog is pointless – it’s also incredibly cruel. If you’ve left her while you’ve gone to the shops, gone to work, or just gone to bed and come back a few hours later to see she’s chewed up the legs of your dining table, it’s a fresh occurrence – to you – but unless they’ve literally just finished doing it, your dog has forgotten about it.

Your dog feels like they’ve been on their own for an age, waiting desperately for you to come home. He hears your car pull into the street and his heart leaps with excitement. He hears the engine get closer and pull into the driveway. He rushes to the door. The engine stops and he hears you open and close the car door. His tail wags frantically. He hears the key in the front door and his heart soars, knowing his beloved human has come back to him. You open the door. He wags his entire body, rushing to greet you, tongue lolling, panting in his joy and excitement. You see your table leg has been chewed off. You look at him. He sees your face and body language change. You scream at him “look at what you’ve done! You bad, bad boy!” You smack him – you yell at him as you hit him across his sensitive nose – and then hit his bum, where his tail was wagging so happily only seconds before. He cowers. He whimpers in terror. He doesn’t understand why you’re punishing him for coming to greet you. He’s forgotten that four hours ago he was so stressed because he missed you so much that he took it out on the table leg. To him, you’re punishing him for loving you.

Why would you want to make your faithful dog, who loves you unconditionally, feel that way?!?

And the sad thing is, he’ll remember that punishment. He’ll fear you. So his destructive chewing will get worse as his fear of you increases. That punishment – whether you yelled at him, hit him, or both – will stay with him – and it causes anxiety – so he’ll end up chewing at more of your property because he thinks you’ll punish him again. Yet he’ll still rush to greet you at the door – because he loves you – but he’ll expect punishment. A lot of dog owners say “I know when he’s done something wrong. I come home and he has his ‘naughty’ face on” or “I know when he’s been bad because when I walk in his ears and tail are down and he acts really sheepish”. This is a myth. Your dog hasn’t necessarily done something wrong. Those facial expressions and body language are your dog desperately wanting to greet you while simultaneously fearing you and the punishment he thinks is coming.

We all know that our dogs can try our patience at times. Let’s face it – none of them are perfect – but neither are we. So when you feel that instant white-hot anger or frustration – stop for a split second. Take a deep breath. Don’t yell. Please don’t hit him. THINK. Your dog adores you. You are his world. Don’t make him fear you.

So, in summary – hitting your dog and shouting at him is not effective – it makes your dog miserable – does not work – and just creates more problems.

So What CAN I Do to Stop My Dog’s Destructive Behavior?

So, you can’t lock him in a cage and you can’t scream at him or hit him – so what’s the answer to stopping your dog’s destructive behavior? It’s ridiculously simple – encourage appropriate chewing. Sounds simple? Sounds too simple? Sounds dumb? It’s not. It works. You get a happy dog who rushes to greet you without fear and a home that remains intact. What do you need? Time and patience, and some appropriate chewing objects. And a little common sense.

Now, we’re not suggesting you give your dog a whole bunch of rawhide chews to last them while they’re alone. In fact, rawhide is a hideous, toxic product and we strongly advise you to seek out a healthy, safe alternative. But that’s another post – let’s get back to stopping your dog’s destructive behavior – we have a number of tricks up our sleeves.

The idea is to teach your dog that you want them to chew on specific items that you give them. They probably won’t get the hang of it straight away – it’ll take some time – and you’ll likely still find that your dog gets it wrong a few times at first and reverts back to eating your house. If you walk in and find something amiss – don’t revert to screaming and beating. Be calm. Ignore him while you clean up any destruction, then behave totally normally.

The easiest way to get this process to go smoothly is to give your dog the items you want him to chew when you’re in the room with him at first. Play with him. Get him excited by the items. For plain toys and vinyl bones, you can get flavored ones or put a little of his favorite soft substance on them – like peanut butter, honey, or a smattering of soft cheese. Praise, cuddle, and reward him when he plays with these toys. When he chews on them, tell him he’s good. Do your silliest “good boy” voice. Then – and this is really important – only give him these objects when you are leaving him. This way, he’ll learn that he gets these toys when you leave – and so learn that you leaving him isn’t that traumatic. He’ll be excited by the items – because he only gets them when you leave – so the items stay enjoyable and novel – and you leaving becomes less stressful. Make sure you’re consistent. Consistency is crucial! 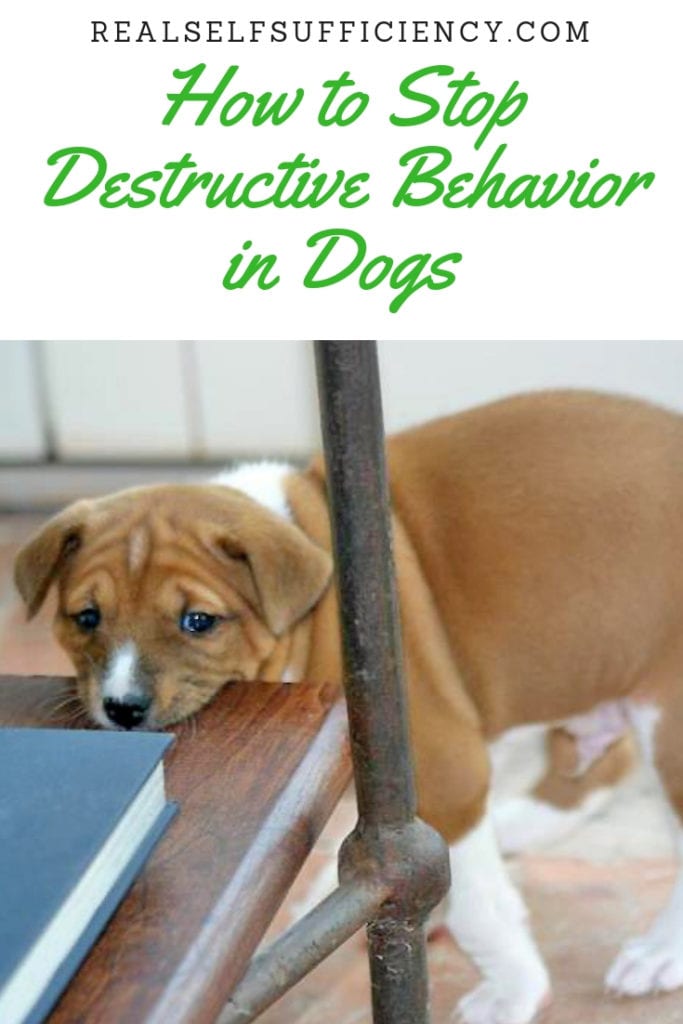 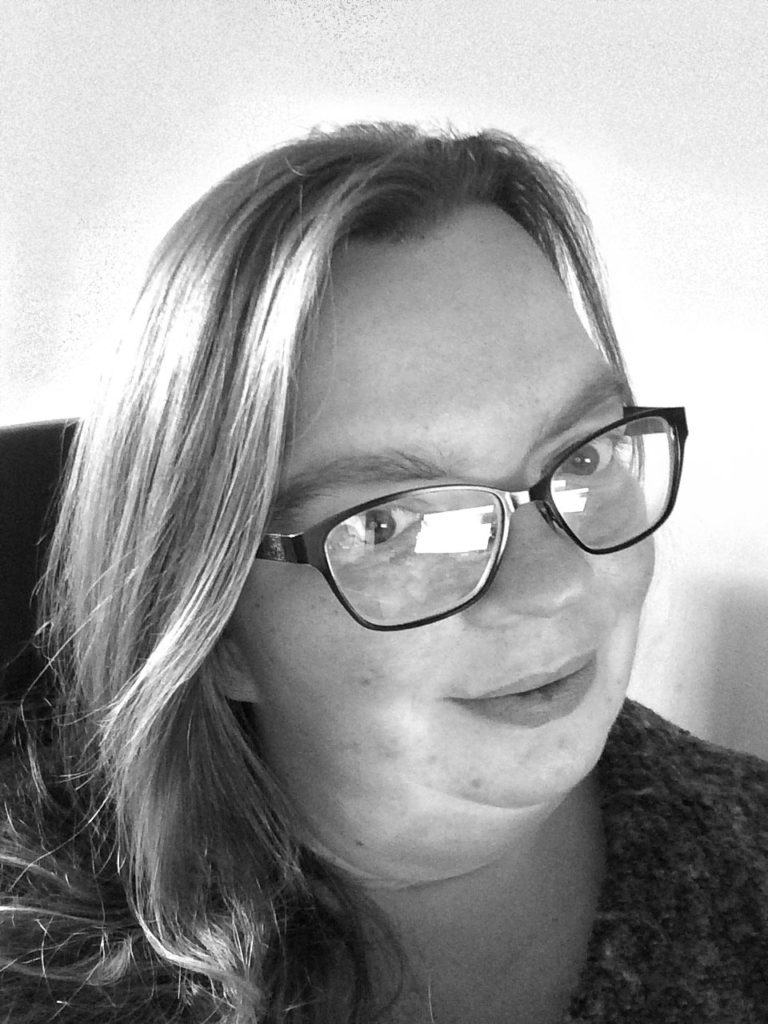 Katy is a life-long homesteader and home herbalist. She is passionate about living naturally, growing food, keeping livestock, foraging, and making and using herbal remedies. She's been writing and editing professionally for over a decade, and she's been living green her entire life. She firmly believes that every small green change we make has a huge impact. Making greener choices is better for your bank balance, your health, and the planet.
← Prev: How to Make Peanut Butter Next: Teaching Your Dog To Leave → 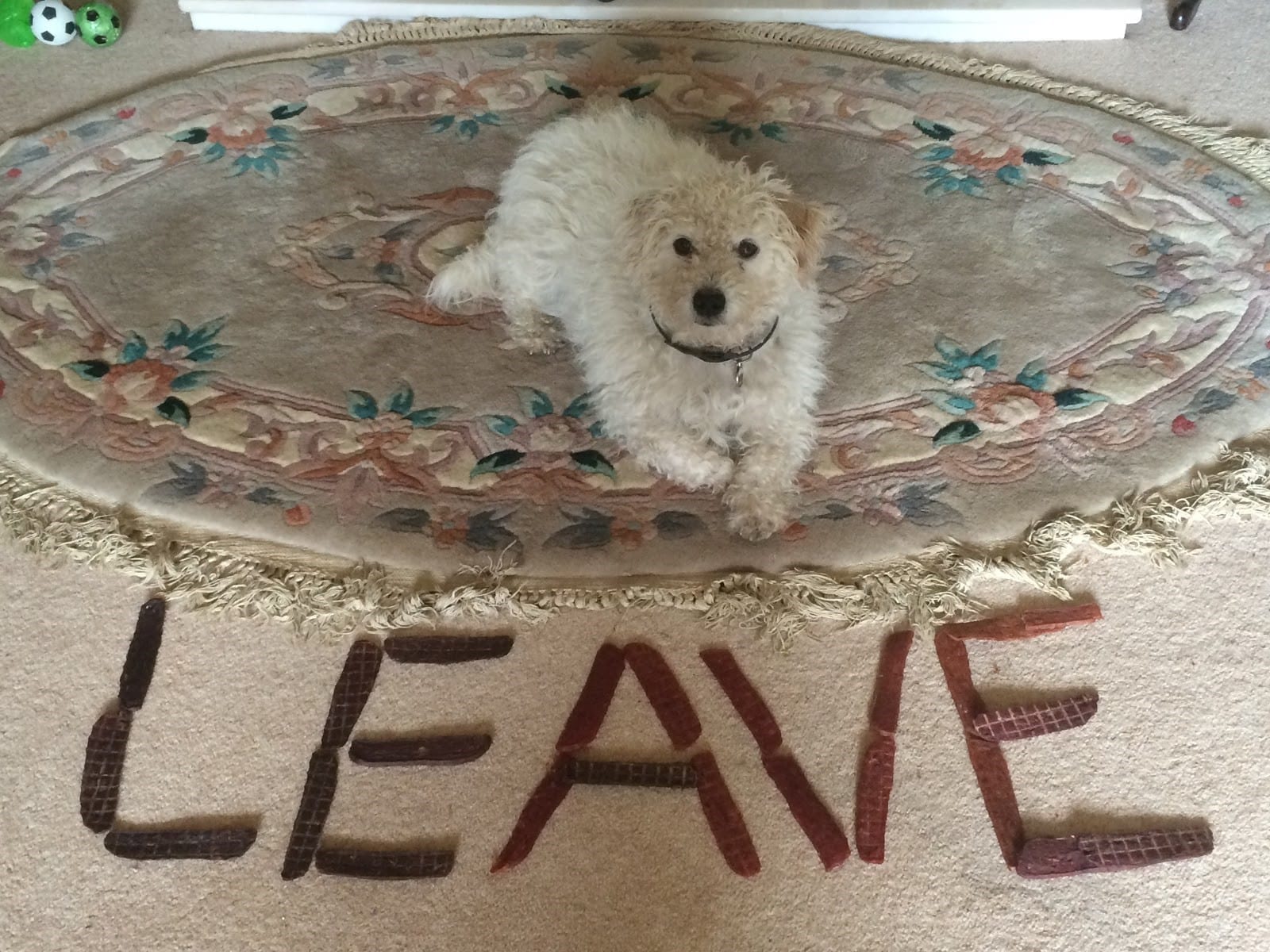 Teaching Your Dog To Leave

Find out how to teach your dog how to leave on command. It may be a basic command but it is incredibly useful especially when it comes to food lying around. 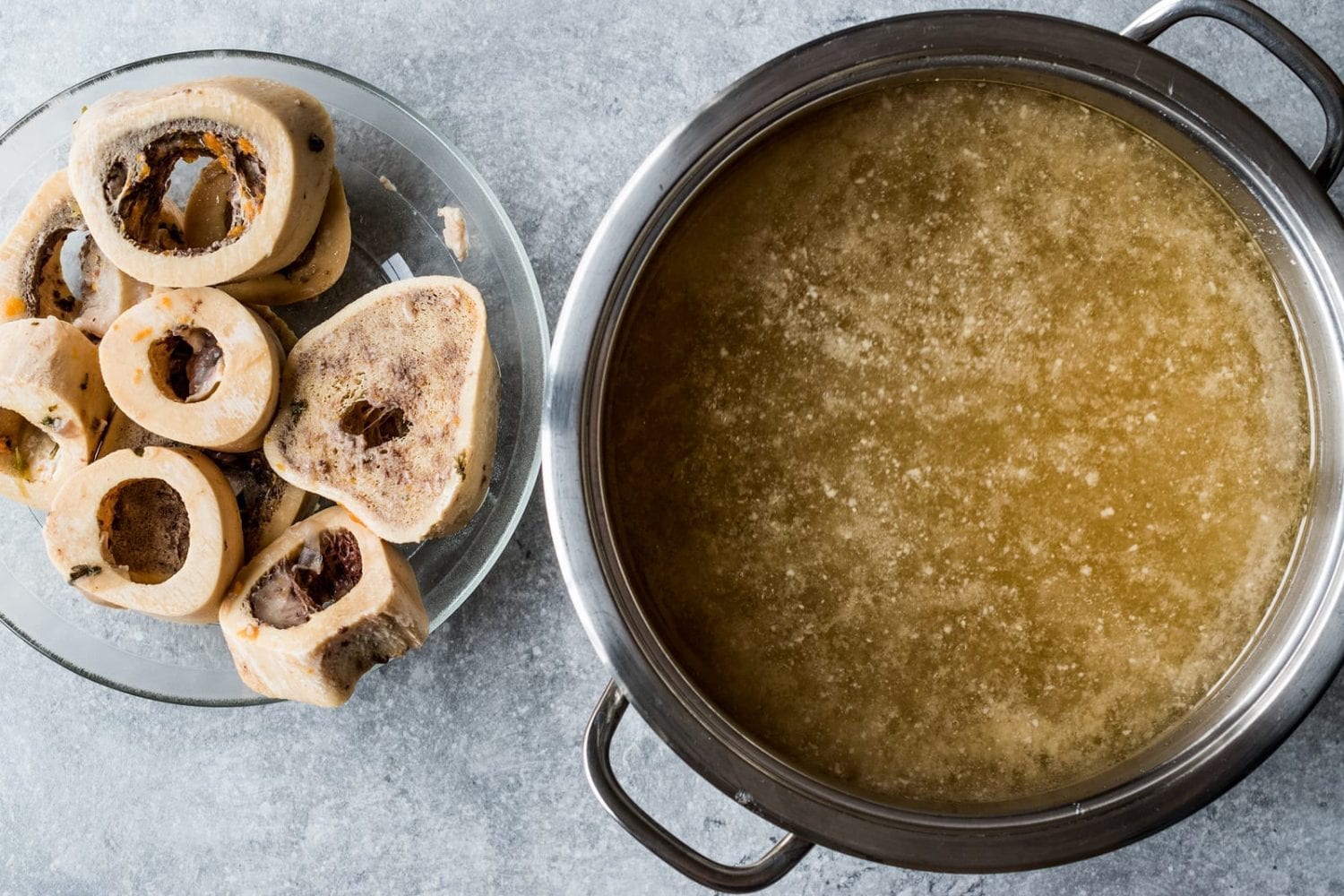 Learn how to make bone broth for dogs, cats, and humans with this easy bone broth recipe. Find out more about this valuable dietary addition. 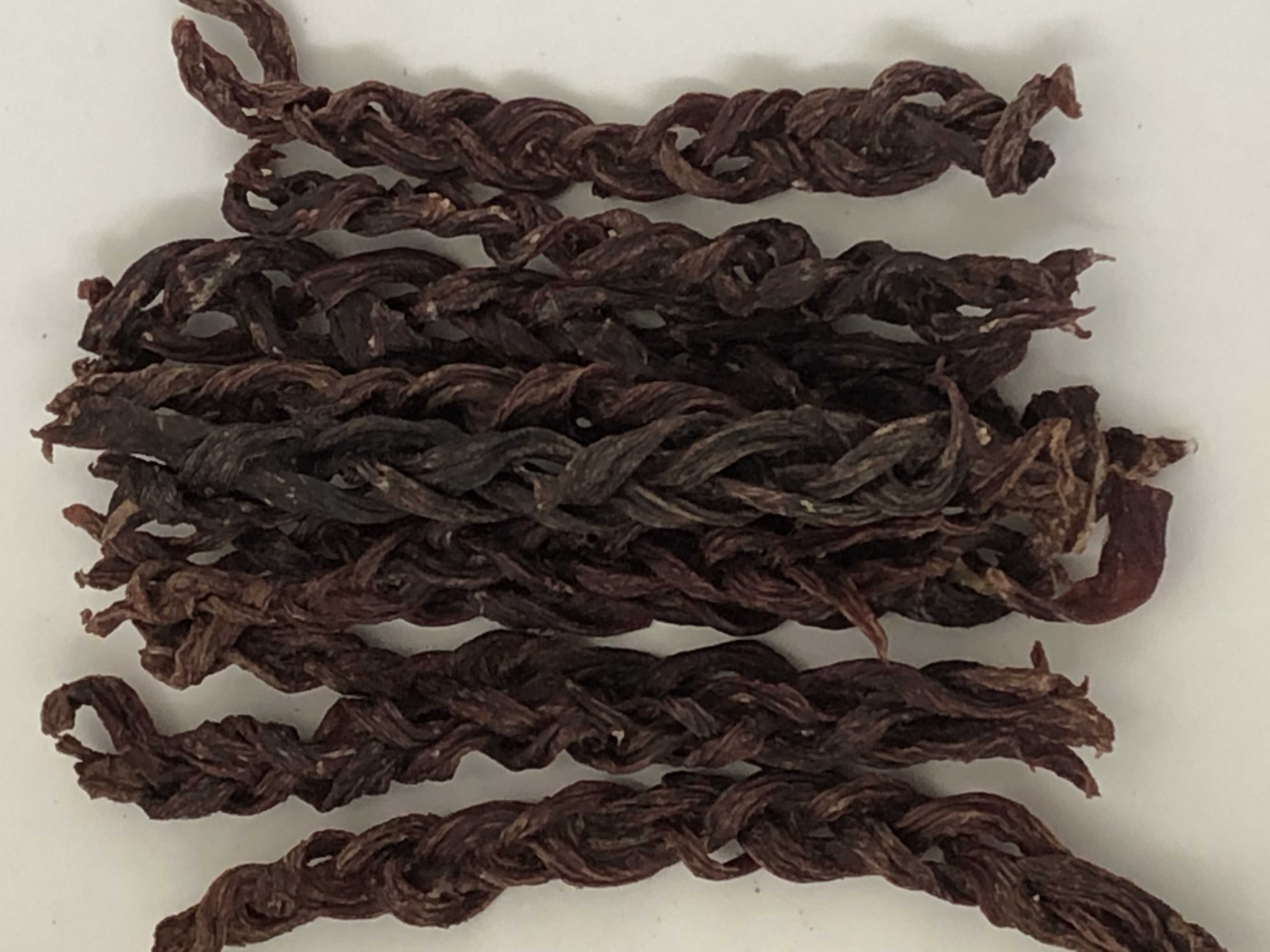 How to Make Beef Jerky for Dogs

Make beef jerky for your dog! Easy to make and great for your pets teeth!